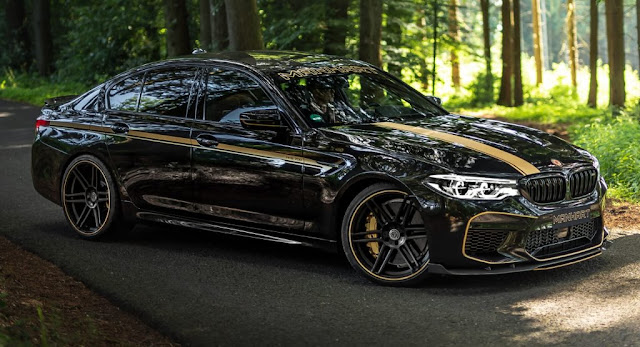 The sixth-gen M5 is almost ready to celebrate its first anniversary, but tuners have already laid their hands on it.

The tuner can also fit your ride with a stainless steel exhaust system and, for an extra cost, customers can order the carbon fiber exhaust tips. In this combo, the car can “behave calm and gentle”, but push the throttle down and the MH5 shouts like there is no tomorrow.

Other mechanical upgrades include the addition of KW coilover springs, which bring the M5 about 20mm (0.8in) closer to the ground, while leaving just enough room under the wheel arches for the 21-inch Concave One aluminum rims that are finished in Silk-Matte Black.

Manhart’s M5 also features a carbon fiber exterior package consisting of a front spoiler with side blades, new diffuser, and a hood that’s said to be in development, contrasted by the matte gold decals.