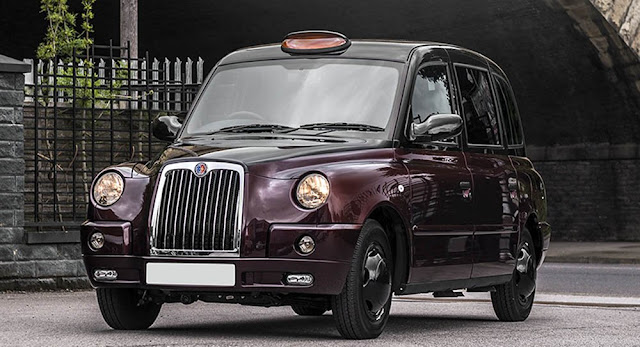 The London Taxi Company (or London EV Company as it’s now known) is ushering out the long-serving TX4 in favor of the new TX5 with its plug-in hybrid powertrain and entirely new design. But before it does, Kahn Design has applied its skills to the iconic Hackney Carriage.

The “Last of Line” edition bears the familiar form of the British capital’s black cabs, but upgrades with an entirely more luxurious approach. Not least of the enhancements is the Rolls-Royce paintjob, available in five two-tone colorways. But there’s more to this luxed-up taxi than a fresh coat of paint.

The grille’s also been blacked out, the wheels are color-coded, the windows tinted for privacy, even the 2.5-liter diesel has been massaged for extra power (though to what degree, we don’t know).

“While it is sad to see a beautiful, iconic vehicle reach the end of its life, it is a great honour to re-design and celebrate what is truly one of the most famous cars in the world,” said Azfal Kahn. “I look forward to embarking on a journey with a select few clients who wish to own their own piece of British history.”

Three examples have already been sold, and not without the original manufacturer’s blessing, it seems: “There was only one person for the job, Afzal Kahn is famous for his original designs and willingness to push the boundaries and we admire his ability to capture the essence of a vehicles’ character,” commented an unnamed LTC spokesman. “We believe he is the best designer to give this iconic vehicle the send off it deserves.”
Tags : Project Kahn, Taxi, Tuning,
Share to: