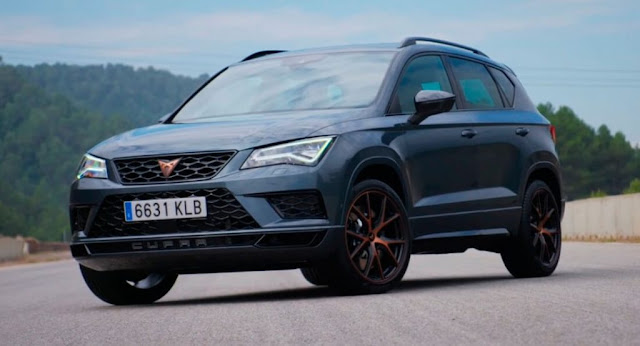 Seat has launched Cupra as its performance sub-brand, and the first product it released is a version of the Ateca SUV.

Labelled the Cupra Ateca, without any mention of Seat’s name, it’s a serious contender in the compact segment, one that’s a bit faster than the entry-level Porsche Macan.

And it’s easy to see why, as it has the same engine, gearbox and four-wheel drive system as the Volkswagen Golf R. But unlike the hot hatch, the increased ground clearance and extra weight make it less fun on twisty roads.

Also Watch: Peugeot 3008 vs Toyota C-HR vs Seat Ateca: Which Is The Best Compact SUV?

There’s some body lean, too, according to WhatCar, who traveled to Barcelona to test drive the Cupra Ateca.

This isn’t a full-blown review of the performance compact crossover, but rather a ‘Top 5’ things to know about it. So, should you consider one? Click and find out.
Tags : Cupra, Reviews, SEAT, Seat Ateca, Seat Videos, Video,
Share to: