Cupra To Launch Seven Models By 2021, Including Bespoke Crossover 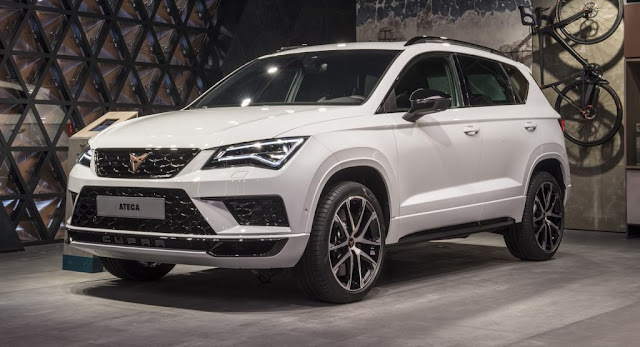 Seat’s newly-formed Cupra performance brand may only be in its infancy as an independent company, but it has big ambitions to create a comprehensive lineup.

As a matter of fact, Periodismodel Motor reports that Cupra intends on launching seven new models until 2021.

Director of Business Development, Strategy, Brand and Operations at Cupra, Antonio Labate, revealed the company’s plans during a recent press event for the Cupra Ateca. He said that included in the company’s seven new models will be limited edition versions of the Ateca and that it won’t simply launch a single Cupra version of each Seat model.

Since Cupra was formed as an independent brand earlier this year, it has unveiled the Cupra Ateca and Cupra e-Racer. While the latter won’t hit the streets as a production model, the Ateca has been available to order for a few weeks now.

Powering the sporty SUV is a turbocharged 2.0-liter TSI four-cylinder delivering 296 hp and 295 lb-ft (400 Nm) of torque. The vehicle comes exclusively with a seven-speed dual-clutch transmission and all-wheel drive. It can accelerate to 60 mph (96 km/h) in a brisk 5.2 seconds and reach a 152 mph (245 km/h) top speed.

The next Cupra model reportedly on the agenda is a new performance version of the popular Leon compact hatch. Other models we expect to see in the coming years include a Cupra Tarraco and a smaller Cupra Arona, while the company is already working on a bespoke crossover.