Slammed Audi A6 Allroad Defies The Purpose Of The Original Car 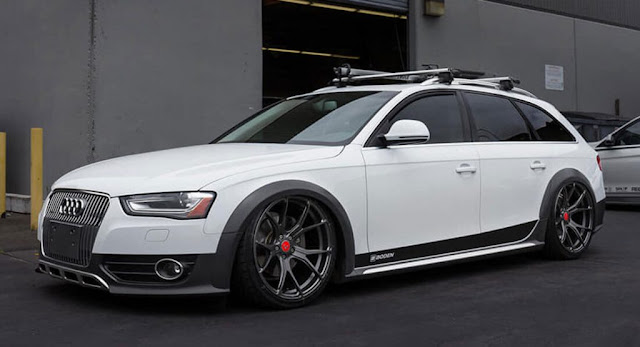 Thanks to its jacked up suspension and plastic cladding, the Audi A6 Allroad is able to venture off the beaten path without scratching its belly on the ground.


It’s no SUV, but it does combine the best of both worlds: the practicality and comfort of an executive estate with the increased ground clearance of a crossover. Thus, it’s often bought by those who are not afraid to get some mud on their clothes from time to time.

Unless we’re talking about turning it into an extreme off-roader, like the Mercedes-Benz E-Class All-Terrain 4×4², which would make it an entirely different animal, or give it a power boost, there’s not much you can do on an A6 Allroad.

That’s it if you want to make it better, because this example has some mods that kind of defy the whole purpose of the stock model.

This particular A6n Allroad has been brought so close to the ground that it will probably have trouble negotiating most potholes. And even if by some miracle the driver would take it anywhere near a curb, then they’ll have to be careful not to damage those new wheels.

Vossen says they’re part of their V-FF series, have a Carbon Graphite look and are 20-inch in size. The rest of the car is the work of Boden AutoHaus, whom you’ll have to excuse for the low-res picture. Now, why would anyone slam down an Allroad instead of opting for something like an S6 in the first place, is beyond us.
Tags : Audi, Audi A6, Tuning, Vossen, Wheels,
Share to: