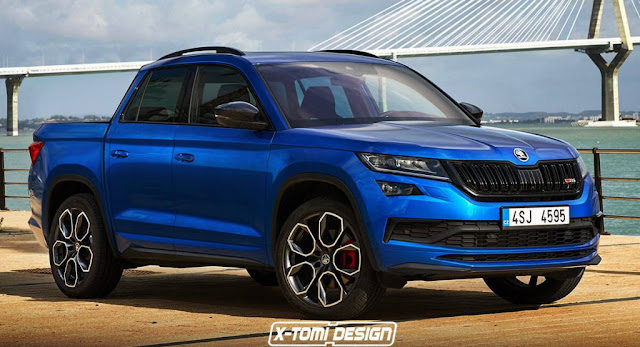 Most mainstream automakers that focus on budget-friendly, family oriented models rarely think outside the box, and for good reason. One misstep and customers might forget all about brand loyalty and go to another manufacturer.

Of course, Skoda has been known to think a little differently from time to time. In fact, they were bold enough to come out with the Roomster back in 2007, which was quirky, to say the least.

So if anybody can challenge the status quo over in Europe, it could very well be Skoda, one of the old continent’s most popular brands, thanks to well-established nameplates such as the Octavia, Fabia and Superb.

The Kodiaq is a new kid on the block, especially in RS spec, which made its public debut last October at the Paris Auto Show. Power comes from a 2.0-liter TDI biturbo diesel with 240 PS (237 HP) and 500 Nm (369 lb-ft) of torque coupled to a 7-speed DSG transmission and all-wheel drive.

Now imagine taking that car and turning it into sort of a compact-to-midsize pickup truck, just like X-Tomi Design did here. Not only would it be fun, quirky and interesting to look at, but it would also be more rugged and utilitarian than a regular Kodiaq.

Which, as far as we know, ain’t going to happen. That’s because Skoda itself hasn’t even hinted at a pickup truck and, what’s more, is currently working towards launching the Scala hatch and expanding its SUV portfolio.