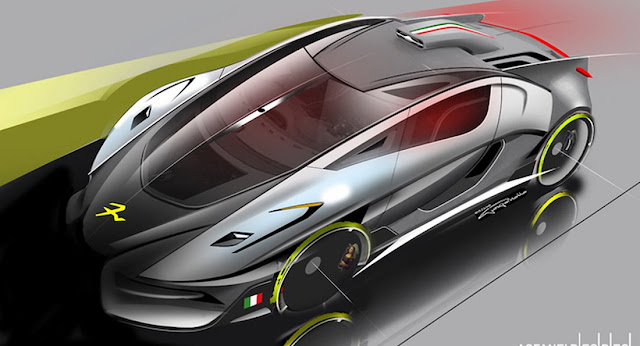 FV Frangivento has announced plans to introduce its new Asfane DieciDieci supercar at The National Automobile Museum in Turin, Italy on May 30th.


The company is keeping details under wraps, but teaser images suggest the Asfane DieciDieci will be a flamboyantly styled supercar with a long windscreen that flows into the hood. The teaser sketch also shows a roof-mounted air intake, rear stabilizer fins and large side scoops.

The wedge-like supercar also has muscular air intakes and what appears to be a four-tailpipe exhaust system. Other highlights include slender lighting units and a number of nods to its Italian heritage.

According to Ansa.it, the Asfane DieciDieci will have a hybrid powertrain that produces 996 hp (743 kW / 1010 PS). Details are limited, but the publication says the model will have a supercharged petrol engine that powers the rear wheels and two electric motors that power the front wheels. This setup will give the model all-wheel drive and more power than the Ferrari 812 Superfast.

The publication went on to say the car will be an evolution of the Asfane concept which debuted at the 2016 Turin Motor Show. It will ride on an aluminum architecture and feature a handcrafted aluminum and carbon fiber body.

As the pictures suggest, the Asfane DieciDieci isn’t production ready. Instead, the model is being billed as a production prototype that opens a “new chapter in the history of FV Frangivento.”
Tags : Hybrids, New Cars, Reports,
Share to: