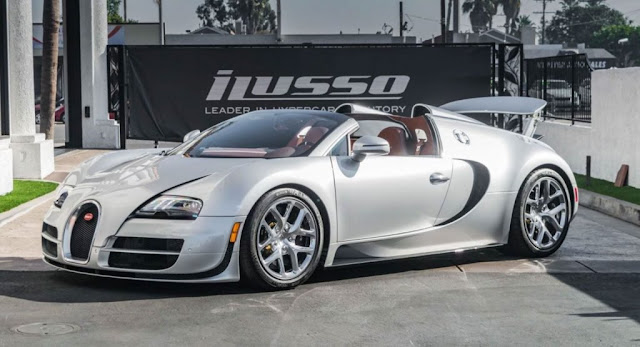 If you want a Bugatti but aren’t willing to wait years for a brand new Chiron, a used Veyron like this one is perhaps the perfect solution.

Currently for sale from iLusso in Costa Mesa, California, this Veyron Grand Sport Vitesse has been been driven for a mere 1522 miles (2449 km) and wears a timeless shade of silver that keeps the hypercar looking fresh.

Like the Chiron, the Veyron Vitesse is powered by a quad-turbo 8.0-liter W16 engine, but whereas the Chiron delivers 1500 hp, the Vitesse makes do with 1200 hp. A 300 hp difference may sound like a lot. yet the Veyron Vitesse remains the fastest convertible Bugatti has ever produced and, in 2013, set a record as the world’s fastest convertible after reaching 254.04 mph (408.84 km/h).

Apart from the unblemished, and quite striking, bodywork, the original owner has also had the interior beautifully upholstered in light brown leather that’s complemented with a plethora of brushed aluminum components. It looks a hell of a lot better than some Veyron and Chiron models that sported carbon fiber in their cabins.

When new, the Veyron Vitesse commanded roughly $2 million in the United States. While no pricing details have been publicized in the James Edition listing, we expect it to be close than the original asking price.
Tags : Bugatti, Bugatti Veyron, Galleries, Used Cars,
Share to: