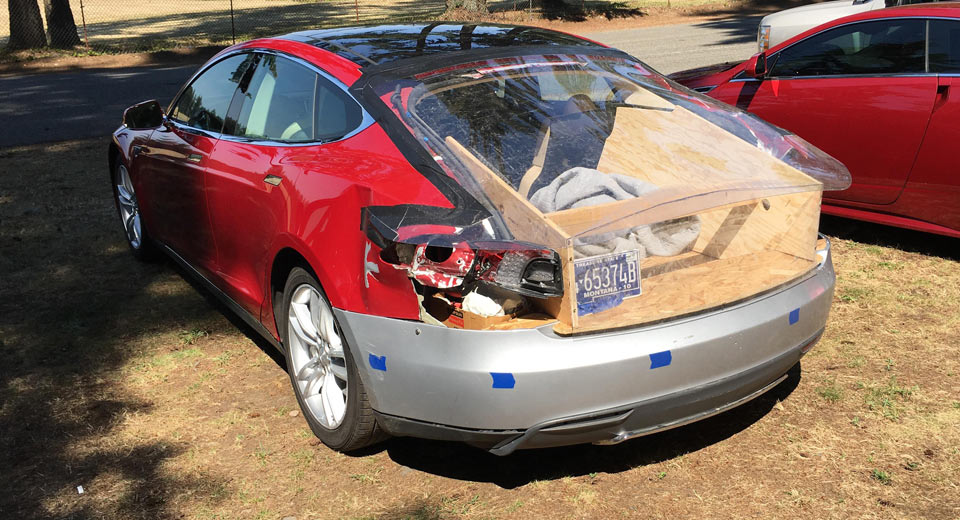 Typically, if your car is insured and you’re involved in a crash, your insurer or the insurer of a car which hits you, will pay for the repairs. Evidently, neither of those two things happened to this Tesla Model S driver.

Recently snapped by a Redditor, this Model S has clearly been involved in some sort of rear-end collision and sustained extensive damage. However, rather than forking out the money to buy genuine Tesla parts to repair the electric sedan, it appears as though the owner has opted for a DIY solution.

In place of the rear hatch and window now sits a single piece of Perspex, cut to fit the shape of the car. Next, the interior of the trunk is made up from pieces of plywood placed vertically and horizontally to somewhat resemble the cargo space of a regular Model S.

Finally, the car features a silver Model S rear bumper with the owner even going to the effort of taping a Montana license plate to the inside of the trunk.

The repairs were probably carried out for less than a few hundred dollars but we’d be amazed if the car is road legal as it doesn’t seem like the smashed taillights are operational.