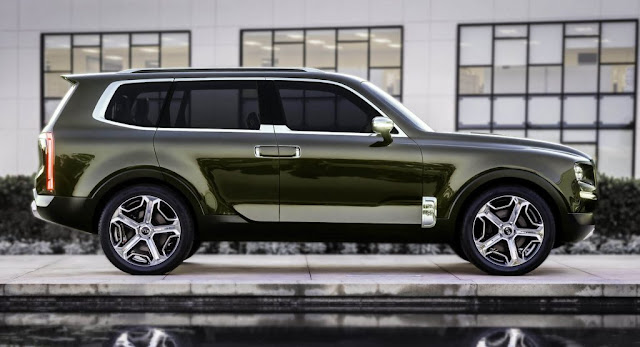 It’s not a secret anymore that #Kia’s working on a range-topping SUV to slot above the Sorento. Scooped in prototype form at the end of February, it was previewed by the Telluride Concept.

According to the company’s product planner for the US market, Orth Hedrick, quoted by MotorAuthority, it will have quite a few things in common with the all-new K900.

“The components are there. We don’t have anything in the plans yet, but we certainly could. All the rolling stock is there”, Hedrick said, likely referring to the RWD-biased platform, adding that a K900-based SUV is “a natural thing”.

In all likelihood, the Kia official was referring to the Telluride (name unconfirmed), and not another SUV. On a side note, Genesis is also working on an SUV, but unlike this one, Kia’s flagship high-riding vehicle will be simpler. “There’s the Lincoln Aviator and then there will be the Ford Explorer”, he added.

Hedrick was also asked why the automaker chose to launch a new K900 after its predecessor wasn’t exactly successful in the United States, and answered by saying that Kia is “not a one and done kind of company”. “And it has a platform we can build off of.”

The production version of the Telluride study is expected debut later this year or in 2019. It has a boxy-looking exterior and probably a minimalistic cabin, and it might not be limited to the North American market, with Russia seen as a potential candidate.

However, don’t expect it in Europe, because it “doesn’t make much sense”, according to the automaker’s chief designer for Europe, Gregory Guillaume.
Tags : Kia, Reports,
Share to: