Lamborghini has officially re-entered the SUV sector, as their brand new, high-performance Urus SUV looks ready to slay any and all opponents in its segment.

According to Lamborghini, the Urus' 4.0-liter twin turbo V8 engine will help it fit in perfectly alongside the Aventador and the Huracan, and based on sheer numbers alone, it's easy to understand why.

The power hits all four wheels with the help of an electro-hydraulically controlled 8-speed automatic transmission, while a torque converter goes on to boost the twin turbo V8's response. The torque split on the four-wheel drive system is 40/60, with a maximum 70% of torque reaching the front wheels on demand, or as much as 87% going to the rear.

Speaking of which, the Urus borrowed the Aventador S' rear-wheel steering system, set to utilize counter-phase steering at low speed and in-phase steering and high speed - the former aiding maneuverability, the latter stability.

Once you get the Urus moving, you can choose between its six drive mods: Strada, Sport, Corsa, Neve (snow), Terra (off-road) and Sabbia (sand), plus a custom mode called Ego. Neve, Terra and Sabbia will all raise the chassis of the car in order to improve ground clearance, while Strada, Sport and Corsa will optimize performance for the street and for various levels of sporty driving. 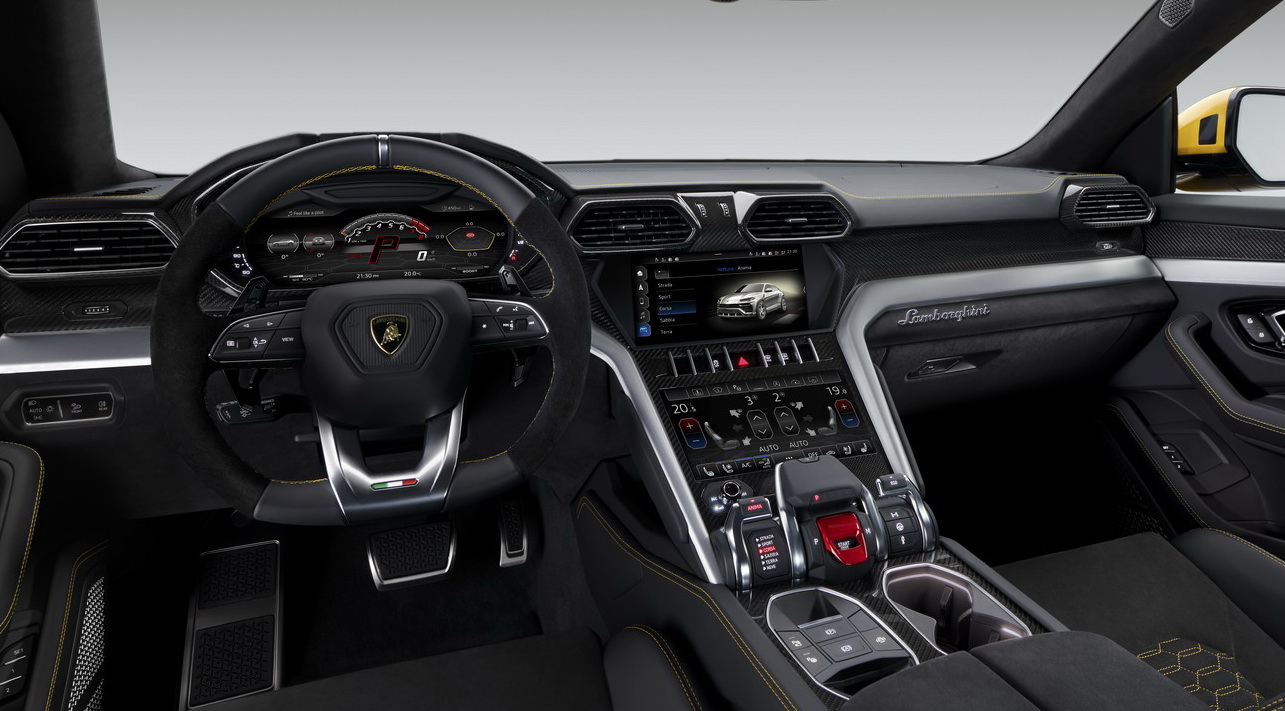 Even though Lamborghini says the Urus took some cues from the LM002, what you'll mostly see when looking at it are its supercar-like proportions where you've got the same "2/3 body, 1/3 window" ratio you get in the Aventador or Huracan. Perhaps just as striking as the diagonal hood lines or the large air intakes, are its sleek front lights, standing horizontally and featuring LED DRLs in the automaker's traditional Y shape.

Once you're done admiring the exterior, stepping into the cabin means reflecting on an interior design meant to channel both luxury as well as performance. Just like other Lamborghini models, the Urus also features multiple hexagonal elements within the dashboard. It's also got a three-spoke steering wheel with vibration damping, a fully digital TFT display, High Beam Assistant, parking sensors, a PreCognition system (preventing/mitigating crashes), plus driver and front passenger 12-way electric heated seats (optional 18-way adjustable front seats). Since this is technically an SUV, Lamborghini will have you know that you can extend the trunk space from the standard 616 liters (21.7 cu.ft) all the way to 1,596 liters (56.3 cu.ft) by lowering the rear bench seat.

As for the "finer things", the Urus' LIS infotainment system is able to recognize voice commands and allows users to fully integrate their Apple or Android smartphones via Apple CarPlay or Android Auto. Sound-wise, you get an 8-speaker system as standard, although a high-end Bang & Olufsen sound system with 3D sound and a 1,700 watt output is available as an option.