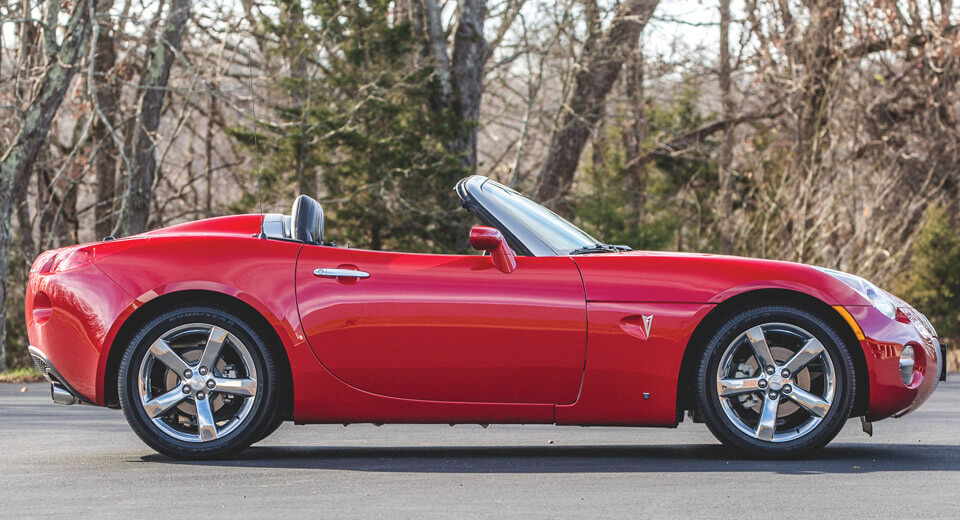 It's been about eight years now since General Motors shut down the Pontiac brand, and took the Solstice with it. But there's one such roadster that's coming up for auction in near-new condition.

The Solstice was Pontiac's last two-seater, and the first it produced since the mid-engined Fiero. It shared its underpinnings with the Saturn Sky, Opel GT, and Daewoo G2X. And sad as it was for Pontiac enthusiasts to see it go, it was arguably a fitting send-off to a once celebrated marque.

The Solstice generated so much excitement for the sports-oriented brand that, within ten days of its unveiling at the 2004 Detroit Auto Show, Pontiac had already taken 7,000 orders – filling up the initial order book for the entire year.

GM responded by increasing production, delivering 10,000 units by March 1. Demand remained strong the following two years to the point that, by the time production ended in 2010, over 65,000 had been made – the vast majority in the first three years. (For reference, Chevrolet sold just over 40,000 of the far-more-expensive Corvette last year, and has never sold more than 54,000 in a single year.)

Along the way, the 2.4-liter inline-four was joined by a more potent 2.0-liter turbo, and the roadster was supplemented by a targa-topped coupe. The example you see here was from among the first made, a 2006 model with the open top, in red over black, with the naturally aspirated engine – and just 1,900 miles on the odometer, making it a potential collector's item.

In such original condition, RM Sotheby's (whose photographer Theodore W. Pieper captured these images) estimates it will sell for about $25,000 when the gavel drops in Arizona next month. But without a reserve price, there's no telling what might happen.