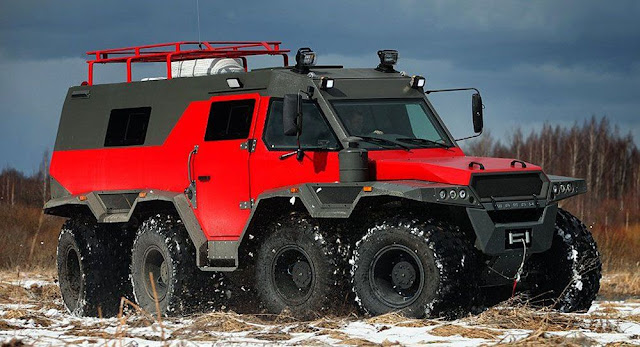 It’s called the Shaman, and it’s made by Russian manufacturer Avtoros. It measures over six meters (>20 feet) long – about half a meter longer than the big Benz. Or put another way, judging on length alone, you could park a Smart Forfour in the same space it’d take to park the Shaman, plus another Fortwo, and still have room to pass between them.

It also has more wheels than the 6×6. Two more, to be specific. They’re each driven, of course, but they also each steer, helping to reduce what would otherwise be an insurmountable turning circle. Each of those 1185-mm tires is nearly four feet tall (a foot taller than the big G’s), giving it 450 mm (about a foot and a half) of ground clearance.

Instead Avtoros fitted it with an Iveco F1C engine – a 3.0-liter diesel inline-four producing all of 170 horsepower (127 kW). Torque isn’t specified, but we’d estimate it to be in the 350-400 Nm range, or about 258-295 lb-ft. That’s about a third the power and half the torque of the G63. So it’s not exactly fast, by any stretch of the imagination. But it does have room for an entire military unit, and it looks like it’d get them to wherever they need to go, no matter the conditions.

We could go on and on, the vehicle is that different from anything else out there. But we’re gonna shut up now and let Joey from Friends show and tell you all about it in this latest segment on Top Gear.
Tags : SUV, Top Gear, Video,
Share to: